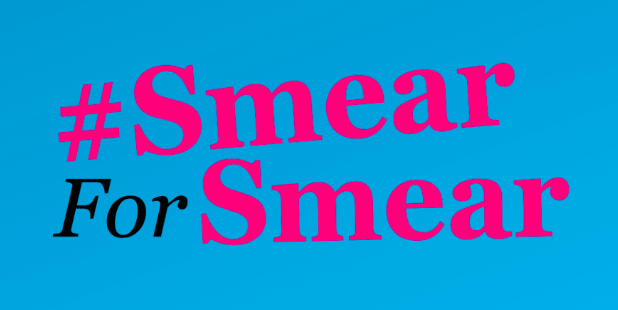 This week is Cervical Cancer Prevention Week and I’m supporting Jo’s Cervical Cancer Trust and   their #SmearForSmear campaign for very personal reasons.  The campaign aims to tackle the myths and stigma about smear tests and the human papillomavirus (HPV) and get the facts out – something I feel very passionate about.

In the UK, one in four women are not attending their smear test when invited. I feel that it’s important for me to raise awareness of these issues and to start a conversation so that more women understand the importance of the test, where to get support and also so they feel comfortable with their results. For some, attending a smear test can be difficult, this includes for survivors of sexual abuse or sexual violence, and those who experience pain, while for women with disabilities it can be extremely difficult to even access the test. I find smear tests uncomfortable however I have previously had  cell changes picked up following a test so I know just how important this test is.

Across the UK smear tests are starting to be tested for HPV first. This is fantastic as it is a much more sensitive test meaning those are greater risk will be identified as soon as possible. It also means more women will be told they have HPV. It’s a really common virus that most of us will have and in most cases the body will get rid of it without it doing harm. Worryingly, new research by Jo’s Cervical Cancer Trust has uncovered widespread levels of stigma, fear and shame around the virus. They found that one in five would feel embarrassed and one in ten would feel dirty if told they had HPV.

From personal experience, I know that the myths and misinformation around HPV can cause a great deal of shame when told you have it.  When I was told I had HPV, I felt deep shame. I wish I had known the facts, especially about how many of us will have it. At the time I felt like I was the only one but I know this isn’t the case at all

Luckily, I was able to create something positive from my experience. I was contacted by a big health company that was developing the HPV vaccine and they asked me to give my cells. I was, of course, more than happy to do this, and so over the next few years I travelled back and forth to clinics, giving my cells and blood.

My experience, one that many women across the length and breadth of the country have had, led to my cells being used to develop the vaccine that is now given to many girls and boys across the country. That is something I am very proud of.

It’s time to end the stigma around HPV and smear tests. I want to encourage more people to know the facts rather than the myths. The only way to prevent cervical cancer from affecting more women is to make sure that we start having conversations, support women and encourage them to go for their smear tests.

Incredible work is being done across the UK by charities such as Jo’s Trust and the Michelle Henderson Cervical Cancer Trust in my constituency, and I want to highlight the amazing work of @MyBodyBackProj and their vital lifesaving services. We need to do what we can to support their work.