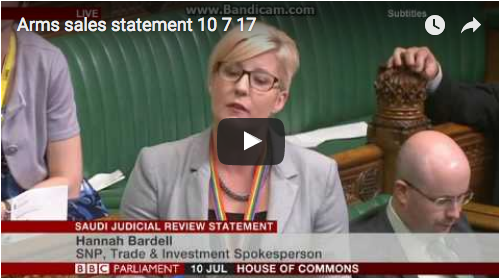 The decision to close HMRC offices, despite a strong local campaign and criticism from the National Audit Office, is outrageous, said Livingston MP Hannah Bardell.

Seeking to raise an Urgent Question with the Chancellor of the Exchequer, Phillip Hammond, Hannah Bardell MP raised a point of order calling on the Chancellor to come to the House with a statement on the UK government’s handling of the announcement and the manner in which it was hushed in during the purdah period.

The Livingston MP criticised the UK government for pushing ahead with a move “without so much as a word, never mind a debate in parliament,” that will see HMRC jobs move to a regional centre in Edinburgh and the closure of HMRC offices in West Lothian. She also echoed a report published by the National Audit Office (NAO) before parliament was dissolved that voiced concerns about the financial integrity, as well as the argument around the cost of the move.

“The UK government’s announcement that it will move thousands of jobs from the HMRC centre at a cost of around £70m without so much as a word, never mind a debate in parliament, raises grave concerns over the conduct and manner in which this was hushed in.

“The National Audit Office report released only a few days before the 2017 election Purdah period, concluded that there was cause for concern about the financial integrity of this and many other HMRC office moves across the UK. Specifically, it is not clear that the move to regional City centres will save money as the UK government alleges. In fact, it could well be of greater cost to the public purse.

“There has been no real and proper scrutiny of this deal, economically or otherwise, despite the numerous concerns raised about the integrity of such a deal. Questions are also raised around the deal being signed during the Purdah period – potentially breaking the ministerial code. Despite raising this repeatedly, the UK government has remained silent and failed to return a reply.

“The Chancellor must come to parliament immediately and offer clarity over the UK government’s conduct on this deal, as well as ensuring that such a move undergoes due and proper parliamentary scrutiny before jobs are put on the line.”