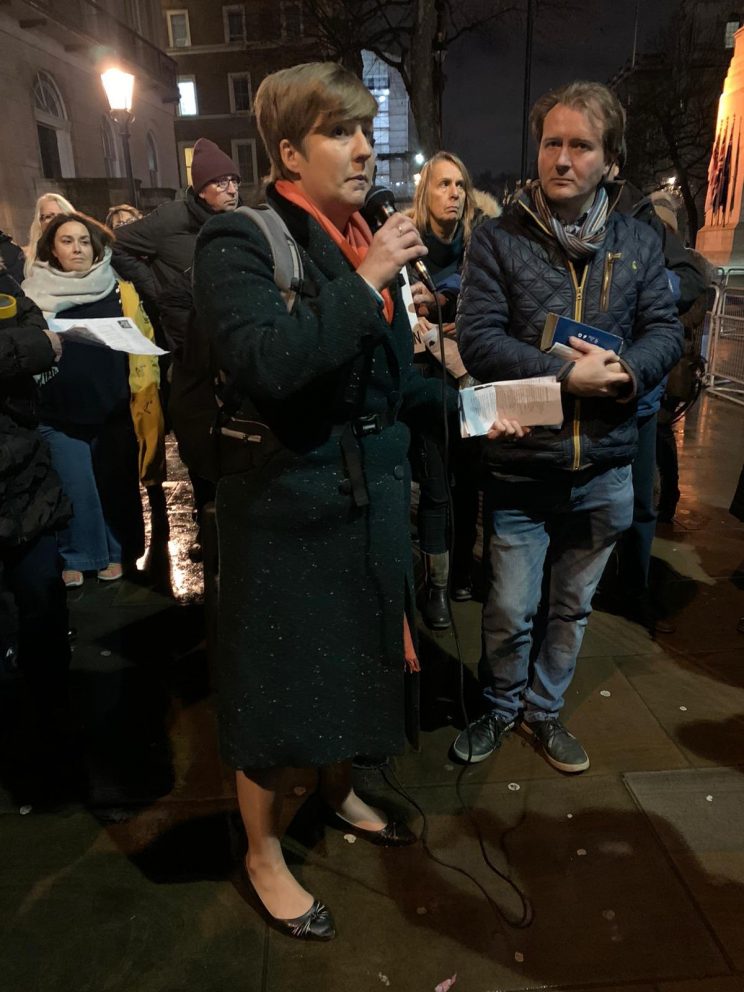 Hannah Bardell MP, founder of the APPG on Deaths Abroad, Consular Services and Assistance, has called on PM Boris Johnson and Foreign Secretary Dominic Raab to do their utmost best to bring Nazanin Zaghari-Ratcliffe home for Christmas.

Ms Bardell spoke out as she joined Richard Ratcliffe, his daughter Gabriella and other family members and campaigners outside 10 Downing Street for the fourth annual Never Forget carol singing event.

Speaking afterwards, she said: “My heart aches for Richard, Nazanin and little Gabriella; to be apart for so long and in such awful circumstances is horrendous. But at this time of year, when families get together to celebrate Christmas, it is so much more difficult to bear.

“The Prime Minister repeatedly and vociferously insists he is going to ‘get Brexit done’ – I’d like to see him show the same determination and focus on securing the release of Nazanin.

“It’s time he made amends for the careless and insensitive remarks he made that worsened Nazanin’s situation by doing the right thing and instructing Dominic Raab to do everything in the UK government’s power to bring Nazanin home.”

Nazanin’s case is part of the substantial body of evidence submitted to the APPG on Deaths Abroad, Consular Services and Assistance. The Group’s report, published a few weeks ago, made a series of recommendations including that parliamentarians enshrine in UK law the right to consular assistance for all British nationals, and that the Scottish Parliament considers a bill to enshrine the legal right to consular assistance for Scottish citizens.

The report also highlights the conflict between trade and the rights of UK citizens abroad, and recommends that the FCO creates a dedicated unit that is not responsible for international trade and economic interests to address the potential conflict of interests between negotiating trade deals and advocating for UK citizens.

“I’m proud to say that the SNP was the only party to make a manifesto commitment to protect UK citizens abroad and to press for all recommendations in the APPG report to be implemented,” Ms Bardell added. “We will continue to campaign for Nazanin’s release, working alongside Richard and the British Rights Abroad Group to protect British citizens abroad.”

APPG Recommendation 3 – Clarify the guidance around consular assistance; enshrine in UK law the right to consular assistance for all British nationals and create a separate department/agency for protection of British citizens distinct from that which currently works on diplomacy and trade relations.

Wording of commitment in SNP GE manifesto: We will press all relevant UK government departments, agencies, services and third-party organisations to recognise secondary victimisation and adopt a ‘trauma-informed’ approach to protect and support families traumatised overseas. We will also press for all recommendations in the APPG report to be implemented.” epartments