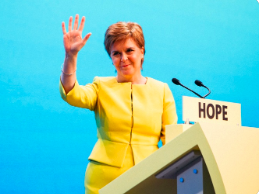 The SNP has published its Alternative Queen’s Speech – a 12-point plan to protect the NHS, end austerity, tackle the climate emergency, and ensure Scotland has the right to choose its own future in an independence referendum.

The SNP won a landslide victory in Scotland at the general election, winning 80% of seats on a mandate for an independence referendum. In contrast, the Tories lost more than half their seats in Scotland – and came 20-points behind the SNP in the vote.

The SNP Alternative Queen’s Speech sets out our priorities to ensure Scotland’s right to choose our own future is respected, to protect our NHS, end austerity, boost our economy, and deliver real action to tackle the climate emergency.

SNP MPs will provide the strong and united opposition to the Tories that the country needs, and we will protect Scotland’s democratic right to choose our own future – so we can get on with building a fairer, greener, more equal and prosperous country.