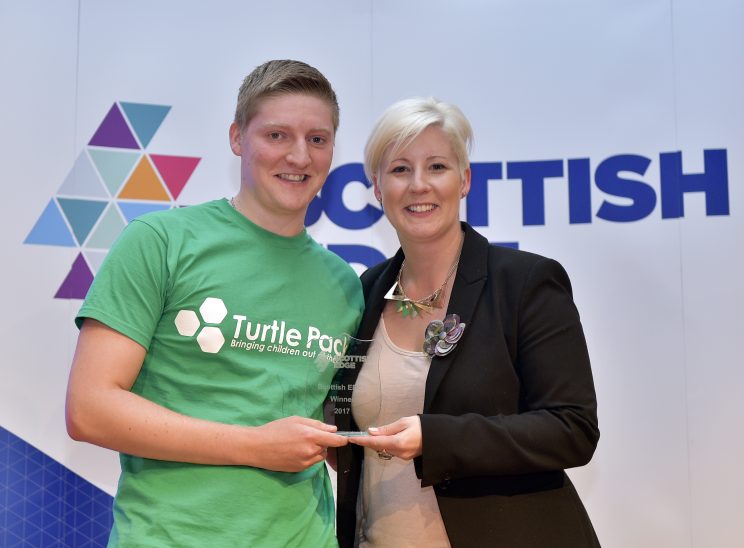 I was totally blown away by the talent, energy, drive and achievements of the entrepreneurs. It’s a cliché to say everyone’s a winner, but I can say with the utmost confidence that with passionate entrepreneurs like them, Scotland will be the clear winner.

Here’s the speech I made before the awards ceremony.

The place of innovation to meet global challenges

May I say very briefly, that following the very terrible and tragic events of recent weeks how uplifting it is to be at an event so bubbling with positivity and positive energy. We are facing some enormously challenging times with Brexit, terrorism and the rise of cyber crime. Innovation and technology will be very much at the heart of tackling some of these problems, so the people in this room, in your industries and sectors, are absolutely crucial not just to Scotland, but to the world.

The American academic Brene Brown once said that, “Vulnerability is the birthplace of innovation, creativity and change.” We are experiencing a period of vulnerability and of change but I feel strongly, that with your help and incredible work, we can rise up out of that, stronger and more robust.

Innovation is, of course, not the preserve of business and the private sector, we need innovation and entrepreneurship in our public sector too, it’s so vital that it keeps up, and with the Scottish Government’s Digital Health strategy there are many opportunities.

I suppose it’s no surprise that we have such a wealth of talent in this room when you consider that Scotland has been blessed with an unrivalled entrepreneurial history – we’ve been hailed as the inventors of the modern world with inventions and innovations in engineering, medicine, technology and much more.

Dundee was once famous for jute, jam and journalism. You can now add a 4th J to that – joysticks. Dundee is now thriving as a games hub, the home of, amongst others, the multi award-winning Minecraft, the fastest selling Xbox Live Game in history, courtesy of the incredible Chris Van der Kuyl, and his team. I may not be a Minecraft expert but I was a bit of a gamer growing up and still have some decent thumb definition to prove it, I suspect though that the skills required to maneuver your way round Minecraft are far superior to those needed for Mario Cart and Golden Axe; yup I really am that old!

Glasgow has become renowned globally as space city, and investment from the UK Space Agency will mean Scotland enjoys an even greater share of the UK space industry, which generates a total annual turnover of more than £11 billion. Around 18% of the UK’s space sector employment – the equivalent of around 7,000 jobs – is now based in Scotland, with successful space companies from around the world choosing to base themselves in Glasgow.

Aberdeen’s global reputation for oil and gas export expertise means we’re doing more and more global business. In 2014 Scottish oil and gas exports reached a record high of £12.2 billion for the first time – an increase of 9%.  New markets and trade partners are emerging all the time in key regions across the world including Europe, North America, the Middle East and the Asia-Pacific. Not to be too sentimental, Arthur Herman once wrote a book which, I’m sure many of you here have read titled, ‘Scotland Invented the Modern World’. I think it’s also fair to say that Scotland invented the ‘modern’ Oil and Gas industry, because whichever oil city or area you go to in the world you are sure to find Scots, or more specifically Aberdonians.

We are exporting our skills and expertise across the globe and Aberdeen still has one of the highest rates of intellectual property in the world. During my 3 years in the Oil and Gas sector I saw an incredible amount of innovation and technology development, just on a daily basis and as a matter of course. I remember fondly working on the marketing for the Autonomous Inspection Vehicle at Subsea 7 which was a collaboration between the fantastic tech company Seebyte and Subsea 7.

Innovation in our food and drink sector has seen record-breaking growth year on year – in the first three months of 2017 alone food and drink worth £1.2 billion was exported, up £124 million (11%) on the same period in 2016. And it was the North East of Scotland that produced two of our finest entrepreneurs and innovators, James Watt and Martin Dickie. I moved to the North East of Scotland in 2007 to work for the Former First Minister Alex Salmond and saw over the next few years their brand go from strength to strength; it is truly remarkable that the Brewdog team has grown at such a pace picking up a slew of awards on their way and being part of that revolution of craft beer that I’m sure many would agree Scotland leads the way in. Even the Queen is a fan, I hear.

We even have our own Unicorns. Following hot on the heels of the news that Edinburgh was crowned Entrepreneurial City of The Year this year, two of its largest success stories – FanDuel and Skyscanner – both revealed £ billion exits.

Locally, in my Livingston constituency I’ve also had the pleasure of working with Michael Harkins of Turtle Pack, whom I’m sure many of you will know. Michael and I actually swam at the same club, the world famous Dedridge Dolphins, just many years apart!

His swimming invention is yet another example of a practical innovation that will be life changing for sport and safety.

Our entrepreneurial eco system is strong – from small firms to unicorns, government development agencies and investors work closely to do what we can to encourage and support our businesses to innovate, to grow and ultimately scale.

And events such as this, with funding support from RBS, are essential to help fledgling firms flourish. Since it was launched, Scottish Edge has received 2,218 applications, awarded £8m supporting 245 businesses that created 818 jobs, £45.06m additional turnover and £44.12m additional investment.

Scottish Chambers of Commerce has made a welcome move in partnering with Womens’ Enterprise Scotland to launch the Women’s Business Mentoring Partnership. Some of Scotland’s most successful women entrepreneurs, such as Marie Macklin CBE of Macklin Partnerships, Poonam Gupta OBE of PG Paper, Petra Wetzel of WEST Brewery, and Jeanette Forbes of PCL Group, have thrown their weight behind the enterprise.

Research shows the economy could benefit by more than £180 billion by 2025 if female entrepreneurial activity in the UK increased to match male activity. In Scotland alone, the economic impact could be as much as £7.6 billion.

But research also shows that by creating and supporting diverse and mixed gender boards and teams, those companies grow faster with increased profitability.

Only 18% of digital technology roles are taken up by women, and the gender gap starts in schools.

Initiatives like the partnership between the Digital Technology Skills Group and Girl Geek Scotland, are a great start – seeking young women who have chosen to study, work or enjoy tech to volunteer as role models and mentors for school age girls.

The Scottish Government has a crucial role to play in fostering innovation and entrepreneurship.

Just this month, we announced a package of new support for business growth.  Companies looking for significant investment will now be able to access an additional £200 million through the Scottish-European Growth Co-investment Programme.

The Programme is the first part of the Scottish Growth Scheme, a £500 million financial package backed by the Scottish Government, to help businesses thrive and grow.

I said earlier that innovation is of course, not the preserve of business and the private sector, that’s why we are so focused on building a culture of innovation and entrepreneurship in Scotland. That’s why we are developing an innovation prize to reward, and invest in, innovation in Scottish companies – such as, supporting digital innovation through CivTech, the world’s first cross public sector technology accelerator.

And we’re building on the excellence of our Universities, and supporting commercialisation of world class research in Scotland.

We have invested more than £5 billion in the higher education sector over the last five years, and have announced in the budget our plans to invest more than £1 billion in 2017-18. We are continuing to support the network of eight Innovation Centres, to use academic expertise to address real world business issues.

And all of this is set against a backdrop of yet another record breaking year for Foreign Direct Investment. With 122 inward investment projects, up 2.5% on 2015’s previous record, these results cement Scotland as the most successful place in the UK for FDI projects outside of London. 21 were R&D projects – underlining the strength of Scotland’s world-class research base.

In my new role as Westminster SNP Spokesperson for Trade and Investment I will do my very best to champion businesses across Scotland and promote Scotland as one of the best places in the world to do business. We have some significant challenges ahead but my door and my ears are open, my colleagues and I genuinely want to hear from you and work with you.

In working towards this, a strong innovation performance will be critical to improving Scotland’s long-term productivity growth and to enabling inclusive growth and the delivery of higher living standards for the people of Scotland.

The Austrian Writer Peter F Drucker once said: “Innovation is the specific instrument of entrepreneurship … the act that endows resources with a new capacity to create wealth.”

Thank you – and a massive congratulations to you all. Scotland needs passionate, determined and successful entrepreneurs like all of you here tonight.